The game is primarily played with the top 3 buttons. A, B and C.

The D(Easy-Special) and E(Easy-EX Special) buttons allow for simple special inputs for beginners where all you have to do is input a direction+button to execute a special move.

A(Light): Executes Light attacks. Every character has an autocombo executed by pressing A several times in succession.

C(Special): Executes the Blast Counter, Throws and Tags. It also has other uses depending on character.

Note: This wiki uses Numpad notation for simplicity and to save time.

Tech Roll: Hold 4 or 6 while knocked down. 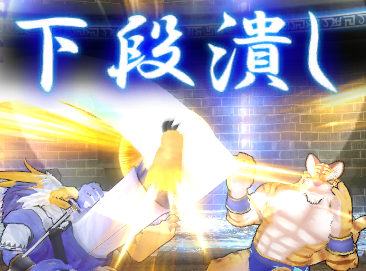 In DragonBlast, counterhits do a lot of damage, and steal your opponent's meter.

These are more effective based on a rock-paper-scissors system.

Since the match ends when one character is KO'd, it's important to know when and how to switch out to your partner.

To tag out normally, press 2C when in neutral. Your character is completely vulnerable while tagging out, and your partner is vulnerable when coming in.

There's also an EX tag. Press 3C while neutral or while hitting with a normal or special to call your partner who tags in with a fully invincible jumpkick. On hit, this tag does two different things.

The timer bar for EX tags.

Here is a demonstration of tagging by the developer.

The Blast Counter, executed by pressing 5C, is a move with a long startup that can absorb 1 hit, and counterattacks with a launcher, allowing for high-damage followups.

On the bottom of the screen, next to the super meter, are 3 icons. These are icons representing "EX Special Moves"

EX Special Moves are executed by inputting a special's motion + C. It's usually a stronger version of that special move. They can only be done when that move's icon is lit up. 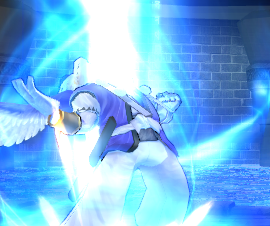 This mode ends automatically when the bar under the Health Bar is depleted.

Starts at 99 and counts down to 0. Once it has hit 0, the team with the most health total will win.

Each character has their own health bar. If the health bar is empty, your character is knocked out, and you lose the match (in the official tag mode).

If a damaged character switches out, they will slowly recover health during the match. Recoverable health is determined by the length of the health bar.

The Super Meter (also called the "chance" meter by the game) is used to execute the non-awakening super, and the EX tag. Activating Awakening manually will deplete the rest of whatever meter you had.