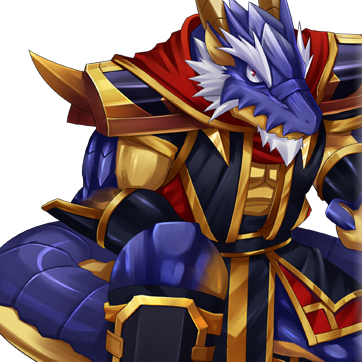 Spacing and chip-damage are what this dragon's all about. Fast normals and a number of screen-controlling projectiles give you plenty of control over your opponent's next move, whether it be for zoning or set-play. Making nearly all of his moves safe keeps your opponent on their toes, and getting in can mean staying in for a long time. Despite this, he has the least reversal options in the game, so staying on top is key.

3A: BIG STEPPIE, Overhead stomp that bounces opponent. Cancellable into EX and Supers only.

6B: Tail Whip. Knocks his opponent back on hit and block. Cancellable into EX and Supers only.

2B: Low sweep that slides him forward. Cancellable into EX and Supers only.

j.?A Two feet. Crosses up, but also reaches crouching opponents. Fumble Attack (An overhead, but does not his on the way up).

5AAA: 3-hit combo that launches opponent. Can follow up with certain moves.

1AAA: 3-hit low combo (1A, 2A, 2AA). Final hit pushes the opponent away. Cancellable into EX and Supers only.

A 4-hit fireball that absorbs most projectiles with its massive size and number of hits.

Summons a pool of liquid the homes in on the opponent. Can be detonated by pressing C. Doing the input twice forms a greenish puddle. When activated it forms a multi-hit drill, but follows the same rules.

A pool of liquid that traps the opponent for a period of time.

Leaves an aerial trap. Like the living liquid, it can be detonated. When left alone, it will create a larger explosion.

This mine cannot be detonated manually but fires a volley of tracking beams at the opponent.

A movement attack that allows Gaou to flip forward into the air.

It can be followed up with a number of commands during the animation.

236236A: Gaou leaps forward and grabs his opponent.