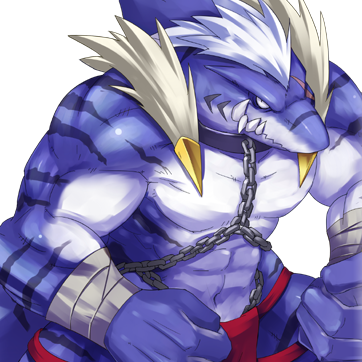 Sticking a fork in you and then some

To make your opponent question their approach, or have your foe fear your own. Kouga is a complete package for any player's needs, by having many moves that can control the field, break through plenty; if not most of the opposition his opponent sets out to reach them, and control their situation on wake-up. Slow-moving projectiles and long, swift pokes allow him to accomplish several things, along with heightened synergy with most of the cast.

6A: Fast Trident poke with a lot of range, at least the length of the character himself. Very safe from any range. EX and Super Cancellable.

4B: Lance wheel, somewhat large. Starts up fast, recovers fast. Pushes the opponent back on hit or block. EX and Super Cancellable.

5B: Roundhouse kick. Less than body length. Move him forward a bit. Cancellable.

2B: Low variation of 6A, just barely the same range. EX and Super Cancellable.

j.(1/2/3)A: Dive, but not a kick. IS an overhead. Especially safe when used close to the ground. VERY active. Crosses-up. Launches opponent on hit. Slight bit of landing recovery. EX Cancellable.

j.8B: Tridentcopter. Yet another overhead. A spinning attack that doesn't end until he hits the ground. If used right after jumping, he's send high into the air, and moves much further. Can hit opponent several times when airborne. Grounded opponents can be crossed up. EX Cancellable.