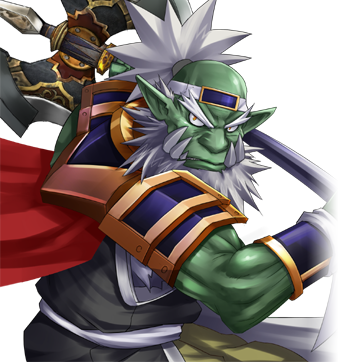 If you want to hit hard and defend well, Kurogane's might could be your choice. He comes with large normals to play at a variety of distances, with a pillar projectile for set-play and spacing. His chip damage is also naturally the highest in the game, so guarding against him too much can be dangerous. All this combined with his counter moves makes him a major threat.

5AA: Follow-up slash to 5A with the same speed and slightly more range. Cancellable. Auto-chains into 5AAA.

6A: Wide, forward-stepping slash with spacious horizontal range. Can hit behind him. Cancellable.

2A: Low crouching forward kick. More range and damage than 1A, but slightly less safe. Cancellable. Auto-chains into ac/2B. Chains into 5B, 4B, 3B manually.

ac/2B: The auto-combo version of 2B. While the same move, it loses its knock-down and cancellable property. It can also juggle.

5B: Overhead heavy axe slam. Likely the HIGHEST chip dealing move in the game, made more insane by proration. Launches on hit. Can reset the juggle rate. Cancellable.

6B: Forward-stepping 2-hit slash. Slightly wider than 6A. Can hit behind him. Launches on hit. EX and Super Cancellable.

3B: A slow, launching strike that moves vertically and around him, hitting forward and behind. Cancellable.

2B: Low, large and quick slash that knocks the opponent down. Can juggle. Cancellable.

j.B: Helm Breaker. Flips a bit higher before bringing it down onto the opponent. Can cross-up in the corner.

Similar to the above, but launches the opponent on hit.

The EX version of the above.

Kurogane punches the ground SO HARD that it causes an eruption beneath his opponent.

The EX version of the above

Kurogane counters his opponent and gains a small axe above the proration bar.

With the icon, said countered move will allow Kurogane one free hit of Super Armor while in the middle of an animation.

The EX version of the above.

The game's only counter super. Ends in a Raging... Ogre.

A whirling axe slice that ends in a wall-splat.