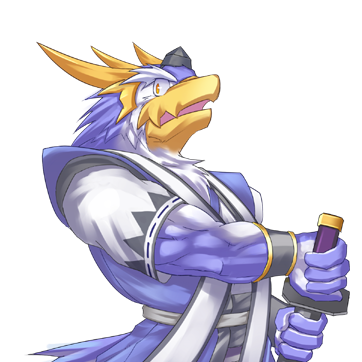 No really, he's the "Shoto" of the game. A balanced character with balanced traits, simple and easy to pick up, and doesn't lack in many areas. His primary strength is neutral, having quick, safe normals with sizable hitboxes, and strong fireball play to keep his opponent out, even a DP for reversals. These many things make him a great choice for any team.

1A: Low-hitting, crouching light kick. Cancellable. Auto-chains into 2A(both block and hit). Chains into 6A, 5B, and 2B manually.

2A: Low-hitting, crouching medium kick. Cancellable. Auto-chains into 2B. Chains into 5B, and 2B manually.

6A: A long, quick poking tool, great for spacing. Cancels into EX and Super only.

3A: Overhead rolling kick that moves him slightly forward. Low-Attack invincibility. Cancels into EX and Super only.

6B: Forward moving, large sword slash. Cancels into EX and Super only.

6C: Yata Throws his opponent by tripping them forward, ending in a ground bounce.

4C: Yata slams the opponent behind him with a shoulder throw.

Two-Hitting Fireball that travels ABOVE ground.

Travels in a downwards diagonal arc.

Reversal Option with even more invincibility.

A spinning slash that goes over lows.

Similar to above., only one solid Overhead hit, rather than 3.

Launches opponent to continue combos, and comes with an enormous hit-box.