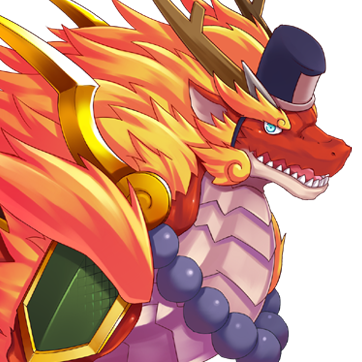 Is it a dog or a dragon? It's both

Ryuugen is a glass cannon character with a special gimmick.

He has the ability to EX chain into 3A, 2B, 4B, forward dash and airdash from any normal, special or EX move. His 3rd EX icon refills over time, and lets him do an EX cancel two times before it has to recharge.

5A: Standard light attack. Fast, has very little reach, leads into his autocombo. Cancels into 2A/5B/2B/6B.

2A: Slightly longer reach than 5A. 2AA automatically chains into 2B. Cancels into 5B.

1A: Faster but shorter than 2A. 1AAA automatically chains 1A>2A>2B. Cancels into 5B.

3A: Overhead with less reach than the impact leads you to believe. Can link into 5A on hit. EX chainable.

2B: Ryuugen spins around with a sword while crouching for a 2hit normal. EX chainable.

4B: Sword uppercut that can hit up to 3 times. His AA normal. EX chainable.

j.6C: Ryuugen dives down and quickly lands from a jump. Can even be done on hit.

5AAA:3hits, then launches. Can follow up with AAA for a 3 hit aircombo.

214A/B (in air): Flame spin. Ryuugen launches himself forward in an arc while on fire.

214C (in air): EX Flame spin. Ryuugen launches himself straight forward while on fire except it's purple.

236236A (also in air): Ryuugen turns himself into a flaming wheel and rolls forward towards his opponent.

Awaken Art - 236236B: Ryuugen shoots up-forward and launches into a series of attacks on hit.