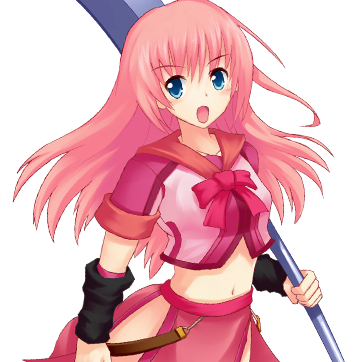 The only human who is not takuto

Shino is all about neutral and distanced pressure. She comes with combo-starting arrows that track an opponent's position, an armored dive-kick for a well-timed approach, and a number of long normals. With long pokes and a number of tools to cover the field and distance herself from her opponents, she can make it difficult to keep her opponent out. Seeing as she's somewhat slow, and has health lower than most, she very much needs it.

6A: Stationary wide slash. Sweeps across half the screen from bottom to high above her head. Does not hit directly in front of her. Cancellable. Chains into 3A and 6B.

3A: Overhead slam. Hits high above and in front of her. EX and Super Cancellable.

2B: Low crouching heavy thrust. Knocks down on hit. EX and Super Cancellable.

4B: Upperbutt. A skyward spear butt slap. Special AND Jump-cancellable (on hit).

3B: Flip-kick. Shino flips over her opponent and kicks the on the other side. EX and Super Cancellable.

j.A: Jumping light front kick. Reaches crouching opponents. Fumble Attack. (An overhead, but does not his on the way up). Cancellable.

(6)C: A chains of attacks that end in a booty-bump.

(4)C: Stabs the opponent with her polearm before slamming them behind her in a ground bounce.