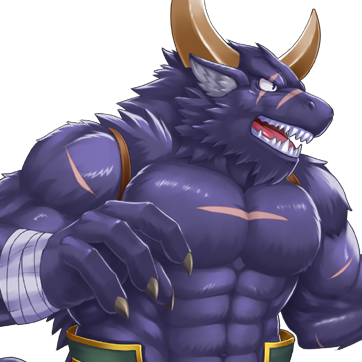 Shiyuu is the closest to the classic style of most fighting games' grapplers. Rather than mixing your opponent up, you play very stationarily. His normals are generally useful and make up for his low speed, in addition to a parry that aids in dealing with the many projectiles and normals that come your way, making for great chances to punish the opponent. With effective play he can catch his opponent off guard and take them to the ground. Once you're in on your opponent, it's very hard for them to escape being gored by his throw game and meaty set-ups.

5A: An overhead that, while timely, has an armor point on start-up. Cancellable, and leads to a grab.

2A: A low jab similar to 4A, but is slightly slower and has less range. Cancellable, chains into 6A, 6B and 2B (6B will not combo).

6A: Another overhead with many perks. It can be chained into from 4A or 2A, avoids lows and grabs of all kinds. Great for oki thanks to a high number of active frames.

5B: 4-hit attack that breaks through armored moves. On hit, can be followed up with a 4A. Cancels into EX and Supers only.

6B: Big straight punch. A good poke that's hard to punish. Cancels into EX and Supers only.

2B: A sweep with good range. Cancellable.

3B: 2-hit Low launcher that breaks armored moves. Cancels into EX and Supers only.

j.2B Body splash. Very quick, crosses up and is easy to confirm from.

6 or 4(when attacked, air also): Parry: With good timing, negate some damage and gain frame advantage.

Despite his simple damage from good reads, some of his combos require a bit more creativity. Aim to end with Super, EX Spinning Lariat and EX Running Grab to top off combos for good damage. Meaty 6A and Spinning Lariat A are potential combo starters, capable of even stronger ones in the corner.