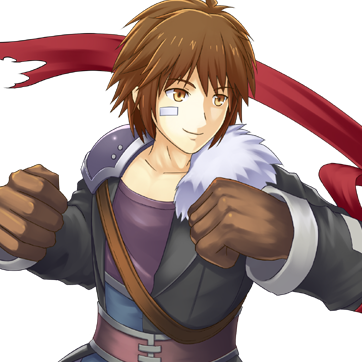 Takuto getting ready to punch you dead

DragonBlast's undisputed king of face-to-face, rushdown pressure. Like a handful of other characters in the game, he can cancel his attacks into dashes. He also comes with his own EX Stock, much like Ryuugen, where he can cancel into other command normals. Combined with fast buttons and strong reversals, he's a major threat when he gets in.

4A: Weave-in and out uppercut. Unthrowable. Dash and Special Cancellable. Stock Normal.

4B: Uppercut. Very fast, but short-ranged. Dash and Special Cancellable.

j.A: Jumping light jab. Very fast start-up. Lingers for a while. Similar range to 5A.

(6)C: Takuto headbutts his opponent into the ground, bouncing them off of it.

(4)C: Takuto Judo throws his opponent behind him.